James Ballard believes that being a police officer isn’t just about law enforcement — it’s about building personal relationships with the people in his community.
As the Elkhart Police Department corporal walks through downtown Elkhart, he always makes a point to say hello to other walkers who pass him or to people sitting at picnic tables in Civic Plaza.
“Most people know me as Jim Ballard, who happens to be a police officer," Ballard said. He thinks being known as a person first and a cop second lays an essential foundation of trust in other people. "If something ever happens, then people know police officers." 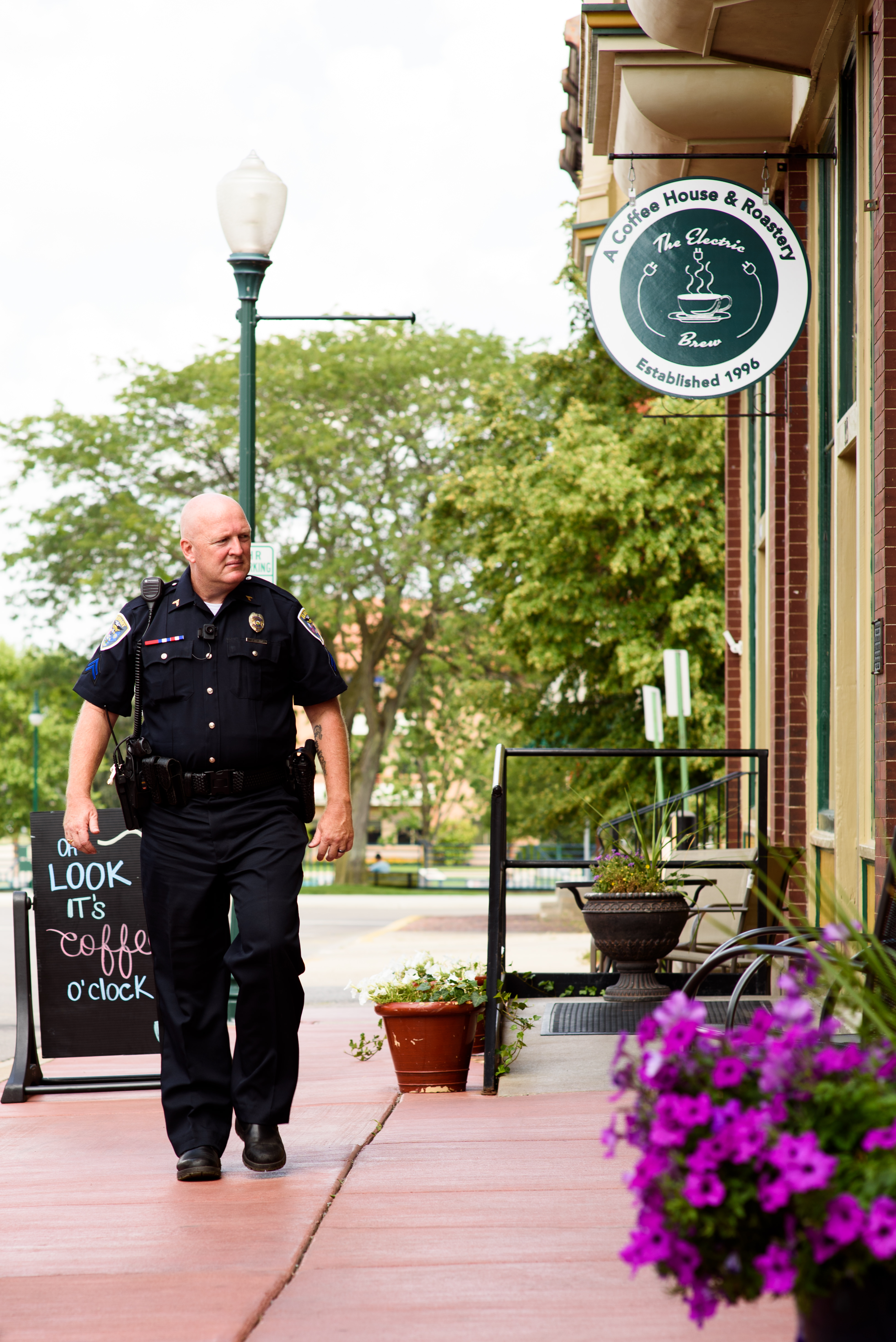 Cpl. Jim Ballard is one of the officers who patrols downtown Elkhart. He makes a point to make personal connections with everyone he sees downtown. Photo by Jason Bryant.
He never dreamed of being a cop as a child. He wanted to be a pilot. He was raised by his grandparents after his mother died when he was 10, and he ended up getting into a bit of teenage trouble a few years later. Someone reached out to him at the right time and sent him down a different path than the one he was on.
“I had an aunt who was married to a South Bend Police officer, Sgt. Eldon Bradley. He came to my rescue and he paid a lot of attention to me and brought me into his family,” Ballard said. He would spend Sundays with his aunt and uncle attending church, watching Chicago Bears games and enjoying Sunday night family dinner.
He was also mentored by Clifford Williams, who recently retired from his post as Elkhart County Chief Public Defender.
"(Williams’) father and my grandfather were friends who worked at Studebaker. We grew up in the same neighborhood, just during different eras. He has known me since I was a baby and knew my mother," Ballard said. "He always gives me no-nonsense, straightforward advice and doesn’t sugarcoat anything."
As he came of age, the influence of Ballard’s two mentors steered him toward a career serving the public. He started doing ride-alongs with Bradley when he turned 18, and he enrolled at IU South Bend to study criminal justice.
One night, Ballard and Bradley were at the White House cafe in South Bend during a ride-along when a man walked in who had been recently appointed marshal for New Carlisle Police Department. He mentioned he was looking for deputies. The following Monday, Ballard was sworn in as a deputy marshal.
He worked in several different positions with the New Carlisle Police Department, Marshall County Sheriff’s Department and South Bend Police Department before joining the Elkhart Police Department 20 years ago.
Now he’s a uniform patrol officer, and he loves it because he gets so much face time with the community. He spends his days driving or walking around downtown Elkhart and the surrounding areas, meeting people, responding to calls and serving the community.
Elkhart Police were given a mission to increase downtown Elkhart foot patrols after Mayor Tim Neese took office, and Ballard is proud to be part of the team leading the effort.
"It’s not only me that does it. Our whole entire administration, our detectives, our patrol units. We all walk downtown," Ballard said. "We’re just very, very grateful to do that. For one, it gets us out of our police cars. It also gets that one-on-one interaction with people downtown."
Ballard remembers a chance one-on-one conversation with a man he saw sitting at a picnic table in Civic Plaza one hot summer morning. He thought the man might be homeless, so Ballard asked him if he was hungry. The man said yes, so Ballard went to McDonald’s to pick up breakfast. He called his wife and asked her to bring the man a cooler full of cold bottled water. Ballard returned to Civic Plaza and had breakfast with the man.
The man was indeed homeless and had recently hurt his back, lost his job and lost his family. After that day, Ballard saw him a few more times around downtown and chatted with him. Months later, the man came into the police department looking for Ballard. He had been considering suicide, but after talking to Ballard, he decided not to go through with it. Eventually, he was able to turn his life around and now he’s a plant manager at an Elkhart manufacturer.
"You never know who you’re talking to sometimes," Ballard said. "It was a joyful occasion that something that minor, stopping and just talking to someone, just taking a few minutes out of your day, can make that much of a difference."
In an effort to reach more people individually, Ballard recently started Soup and Selfie Wednesdays at The Vine on Main Street. He invites the public to join him for a cup of soup at about 11 a.m. every Wednesday to talk about whatever is on their mind, enjoy a hot meal and take a selfie with Ballard. Ballard enjoys a bowl of soup at The Vine and takes a selfie with Jeanne Kern, who owns the restaurant. He invites the public to join him at The Vine every Wednesday for Soup and Selfies. Photo by Jason Bryant
"It’s a way I thought I could get people to come into a downtown business and to engage with me during lunch," he said. He hopes that people post the selfies online and spread the word. Eventually, Ballard said he would like to expand to other downtown restaurants over time.
When Ballard isn’t talking to people face-to-face, he spends time interacting with the community on Facebook. When a fellow officer is trying to raise money to buy a new bike for a kid whose bike was stolen, he posts it on Facebook. When someone asks a question about a city ordinance, he answers.
Recently, a woman’s downtown apartment was burglarized and all of her food was stolen. She lives on about $30 to $40 a month and didn’t know how she was going to replace her food. Ballard put a call out on Facebook.
"Within a day, we were able to raise enough money to give her a $150 gift card every month for seven months," he said. "Every month, I’d give her a gift card, and that gave me a chance to stop in and talk to her and make that connection."
When Ballard is off-duty, he spends much of his time with his wife Mary Anne, son Sean, stepson Christopher and grandsons Liam and Quinlin.
He also finds other ways to build community. He’s president of the Blue Knights, a law enforcement motorcycle club. He started the Riding to Remember police and veterans memorial ride 19 years ago. Motorcyclists ride along a designated route through every city and town in Elkhart County, starting and ending in Elkhart. The event has raised more than $300,000 for various charities over the years.
When Neese was running for mayor in 2015, he asked Ballard to help bring Elkhart Bike Night back to downtown. Ballard jumped at the chance. More than 4,000 people attended the first one in 2016, he said, and about 6,000 attended in 2017.
"We raised money for St. James Boxing Club this year. They take a lot of inner city kids and give them something positive to do (and teach them to box)," Ballard said. "They had an exhibition in a boxing ring in Central Park (during Bike Night). It was their biggest xhibition ever."
In addition to getting motorcyclists together and helping a worthy charity, Ballard loved seeing so many people downtown for Elkhart Bike Night. He was a member of the original Vibrant Communities program aimed at drawing people to explore the county, and he loves seeing crowds at downtown events. He’s delighted by the Seward Johnson statues and the tourism they’ve encouraged, and he hopes to see more things like that in the future.
"I’m seeing more and more of our empty storefronts that have businesses in them now. We’re getting more bars and restaurants in the downtown area within walking distance," Ballard said. "Back four or five years ago, if you walked downtown after 9 o’clock at night, it was like they rolled up the carpet and put everything away. Now it’s alive.
"I think Elkhart, for so long, was kind of caught in the past. Not anymore. We’re getting there," he said.
As downtown Elkhart grows, Ballard plans to stay focused on making individual connections with business owners and citizens alike. He encourages businesses and organizations who have ideas about ways the police department or the city can better make those connections to contact him or Community Relations Sgt. Wayne Bias.
"There’s a lot of uncharted territory out there that we haven’t hit," Ballard said. "It goes back to what we’re doing right now, laying that foundation of trust."
By Admin|2018-01-02T02:08:14-05:00September 9th, 2017|Faces of the Gateway Mile, Uncategorized|0 Comments